Taliban and China – An Unholy Alliance

In Washington, Joe Biden continues to describe his disastrous withdrawal from Afghanistan as a “great success.” At the Pentagon, we can be sure the awards ceremonies are already being planned. There will be medals and promotions all around, and no one – save a single Marine lieutenant-colonel who dared tell the truth – will face any consequences. Such is life in the imperial city where reality rarely intrudes.

Meanwhile, in the real world where the rest of us have to live, the scope of the Afghan disaster grows bigger every day.

The Taliban recently announced the results of its leadership conclave. Full 50% of the seats on the governing Shura council will be held by the Haqqanis or their allies. The Haqqani network is a designated international terrorist organization. Many of its principal leaders, who will be in senior positions in the new government, are officially considered terrorists by the U.S. government. Khalil Haqqani, who now runs security in Kabul has a $5 million bounty on his head. 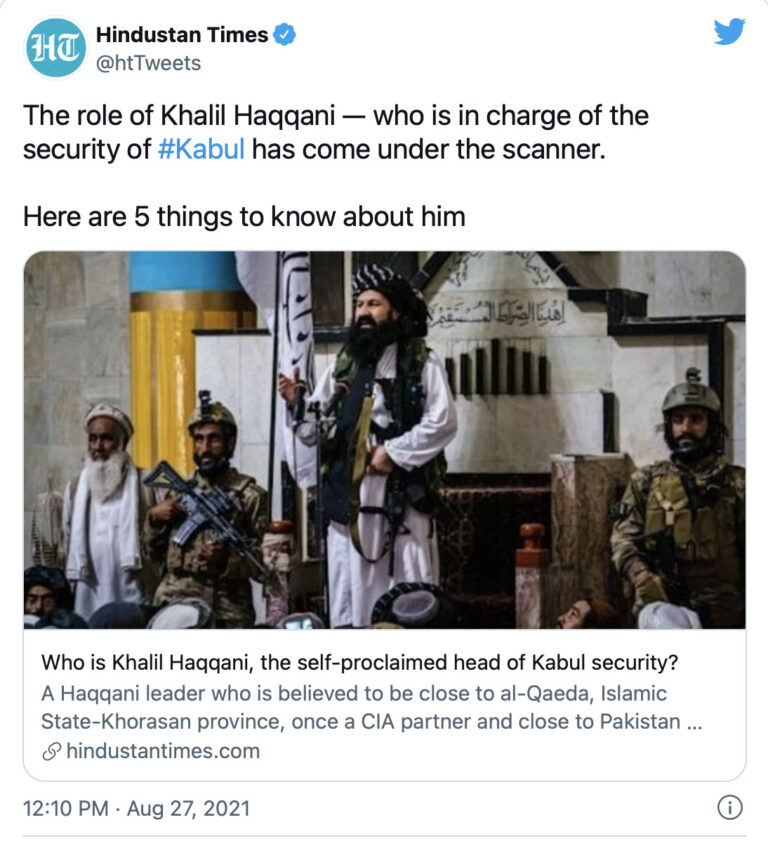 This new terrorist government has announced that China will be its principal ally. “China is our most important partner and represents a fundamental and extraordinary opportunity for us because it is ready to invest and rebuild our country,” Taliban spokesperson Zabihullah Mujahid was quoted as saying.

China has already formally recognized the new government in Kabul. Its embassy is open and in full operation. Discussions between the Chinese and the Taliban have reportedly included the possibility of granting Beijing Bagram as a military base. Chinese technicians are on the ground helping the Taliban access computer files and intercept communications as part of an effort to hunt down and eliminate opponents of the new regime. The Taliban has apparently agreed to arrest and turn over to Beijing Uyghur oppositionists hiding in Afghanistan.

China’s interest in playing a major role in Afghanistan is at least in part due to that nation’s mineral deposits. There are in particular vast quantities of lithium in Afghanistan. Lithium, which is exceedingly scarce, is a key element in most of the rechargeable batteries manufactured in the world today. 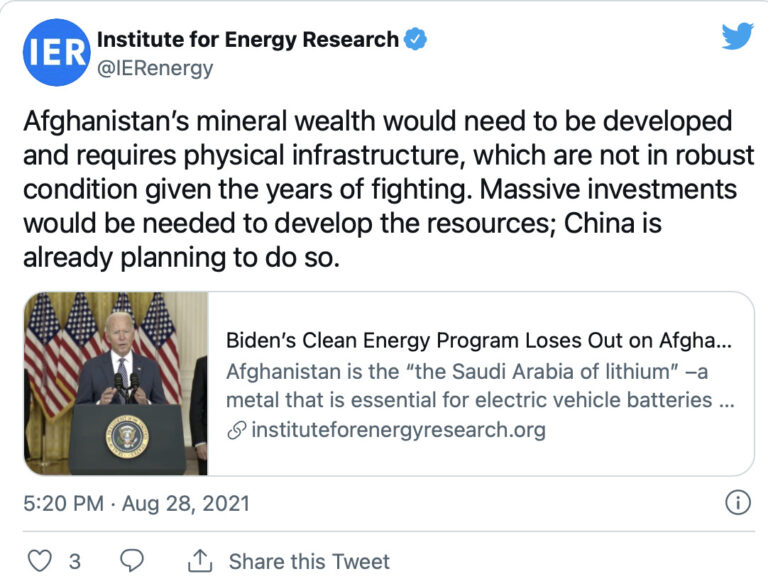 Helpfully, the Biden administration has now mandated that 50% of American cars must be electric by 2030. That means lithium batteries. There is only one lithium mine operating in the United States. Efforts to open more face challenges from environmentalists. Chinese control of Afghanistan’s lithium deposits combined with Biden’s mandate means we are in the process of handing the Chinese the capacity to strangle a large portion of our industrial production anytime they choose.

Emboldened by our humiliation in Afghanistan the Chinese recently ordered all vessels transiting the South China Sea to comply with its new maritime rules. According to Beijing, all foreign vessels, both military and commercial, will be henceforth required to submit to Chinese supervision in “Chinese territorial waters.” One-third of all the world’s shipping transits the South China Sea in which Beijing has constructed a series of heavily militarized artificial islands.

As Vice-President in 2013, Biden flew to China to meet with Chinese leaders about their then-nascent island-building campaign. Theoretically, he was to push back on Chinese expansionism and halt the construction of islands in what are clearly international waters. Instead, while Joe met with Chinese leaders, his son, Hunter picked up $1.5 billion from the State Bank of China. The Bidens then flew home and not surprisingly we never did anything to stop the Chinese annexation of the South China Sea.

One presumes we will see a similarly robust response to the latest Chinese action now that Joe is in the White House.

The Chinese have also wasted no time in rubbing the American defeat in Afghanistan in the face of the government of Taiwan.

“From what happened in Afghanistan, those in Taiwan should perceive that once a war breaks out in the Straits, the island’s defense will collapse in hours and U.S. military won’t come to help,” said the Global Times, an official CCP mouthpiece. “As a result, the [Democratic Progressive Party of Taiwan] will quickly surrender.” 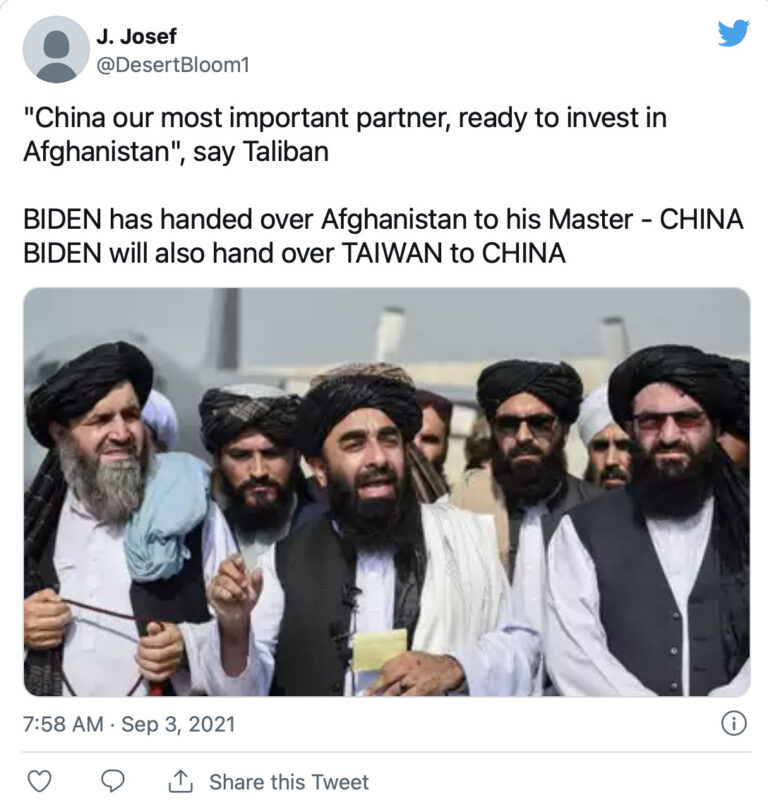 Inside Afghanistan, the Taliban are hammering away at the last bastion of resistance in the Panjshir Valley. Al-Qaeda members are fighting alongside the Taliban. The forces holding out in the Panjshir are in desperate need of assistance. No move to help them is forthcoming from Washington, instead, the Biden administration is making noises about providing financial aid to the Taliban to strengthen their hold on the country. 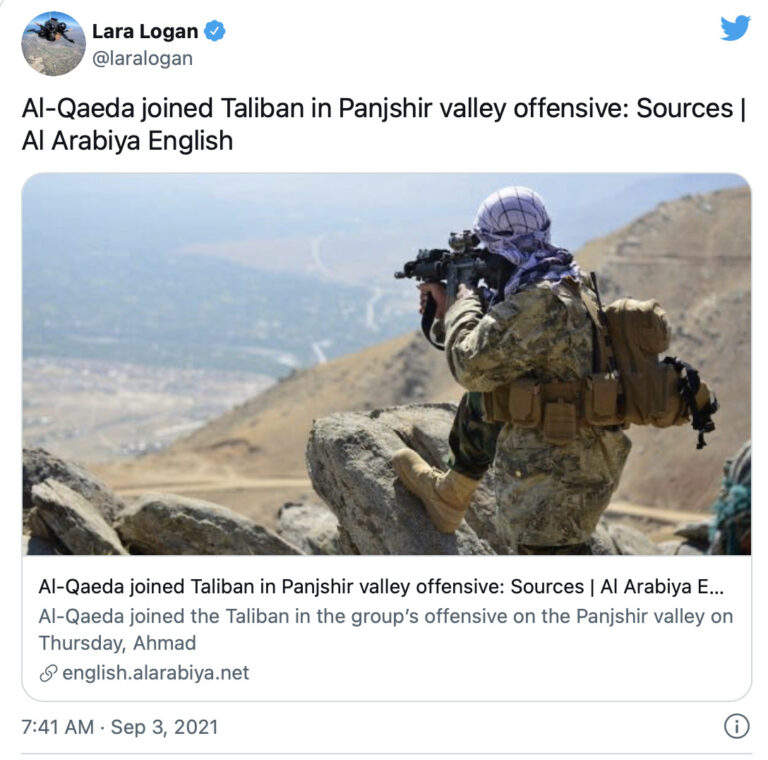 All across Afghanistan vast stockpiles of American weapons, abandoned when the feckless Afghan Army fled the field, have been seized by the Taliban. No move was made to destroy this equipment as the country was falling. Even now with our forces out and the Taliban in control, no action has been taken by American forces to bomb the facilities where the armored vehicles, helicopters, and other weapons systems are stored.

Iranian technicians have already been given access to the most sophisticated of the weapons systems in question. They are transporting samples back to Tehran so that they can be reverse-engineered and then used against us in future conflicts. No efforts are underway to interdict or interfere with this activity.

Reality is often harsh. Biden may wish to pretend that he has ended a war and reduced the threats to our nation and the world. Nothing could be further from the truth. We are faced now with a terrorist superstate that is forming alliances with key enemies of ours like the Chinese and the Iranians. All of these entities are emboldened, empowered and more determined than ever to seek our destruction.

We have not ended anything. We have guaranteed further conflict and endangered the republic. Such are the consequences of defeat.

Read more at AND Magazine

Multiple news outlets have covered the case of Juan Tang, a former University of California Davis researcher who had been charged with visa fraud for lying about her military service in China. All charges have been dropped against Tang, and she has been allowed to return to mainland China.

Did Biden Just Conspire With The Taliban?

CIA Director Burns was in Afghanistan not to ask for more time in which to complete the evacuation. Something truly monstrous was underway.